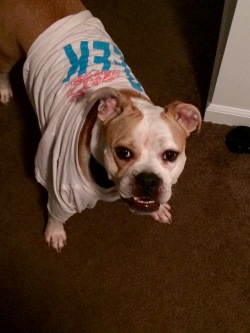 As mentioned in an earlier post, Nelly, the Bulldog/Boston Terrier mix is a bundle of joy coated in the sour covering of a past unknown. Much can and has been learned from the beloved Shitty House Dog. Besides patience, kindness, laughter, and a handful of other things, Nelly has taught me to love myself just a little bit more.

From time to time I look down at my toes only to be met by a warm, round belly staring back up at me. Weight gain fueled by food, friends, and drinks has taken up residence on my body. These pounds have accumulated from binge eating Chinese food, Moon Bread, and Bird burgers. Food happens, and so does weight loss and gain.

Most days I am met by Shitty House Dog’s belly turned up at me. If you are willing to pet it, she is willing to show you her trouble spot. This vulnerable place is covered in scars from her past, sharp nails that took a vet and three techs to trim, and a uniformly done spaying procedure. This soft and sensitive place is what most of us try to hide.

I understand that Nelly is a dog. Nelly does not experience the same body shaming that most people do, yes. Nelly lets it all hang out because she accepts that she was built to be bigger, yes. But why cannot I, one of her humans, receive my body with as much love.

A Bit of a Back Story

Entering college, I expected to gain the pounds so kindly called the freshmen fifteen. I unlike some of my peers ended up losing the weight because I did not adjust well to the food accommodations. Some could eat plates of it while I could smell it and get nauseous. For two years I lost weight because eating was not appealing and when it was, it was only a quick snack. I also took up bad habits such as living off of black coffee for several days at a time. Losing the weight was exciting. I was smaller than I was in high school and I was down several sizes. Losing that weight also came with an unfortunate side-effect. The side-effect was that with any and every weight fluctuation came the panic that I would gain all of the weight back. I entered into a world of questioning my food, gaining weight, and not enough time in a day to balance my diet, and exercise routine.

To make matters worse, I spent a year living in a house where people watched what they ate. I lived with some of the healthiest humans on the planet. Transitioning into a house where not being fit was not an option, gaining the 21 lbs when you turn 21, and being so poor that I felt panic thinking about grocery shopping was difficult. The insecurities of my body that I had conquered in the past once again engulfed my now slightly larger body. During this time I focused so much on what others thought of my body that I lost sight of what I cared about.

According to myself, no one looked like me. Even though we were all made to look different. 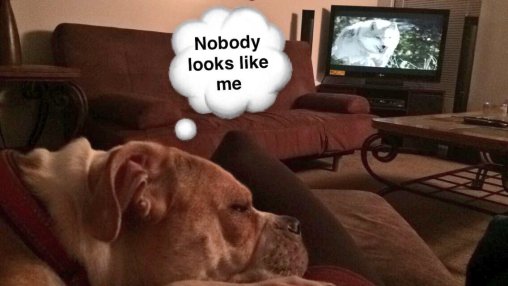 As you can probably imagine (or not), summer for the people outside of societal beach bodies is a struggle. Wearing a tank top without the arms for it, wearing shorts with cellulite, and fearing all situations that could possibly include a swimsuit make for a dark summer. Adopting Nelly a few days before one of the biggest lake weekends sent me down a spiral of swimsuit panic. Both of our chubby bodies would soon be seen by friends, family, and strangers out on the lake. While I looked at Nelly clutching my not so itty bitty swimsuit and cover up, she looked at me with the excitement that she would soon be out on the water, laying belly up on a boat, soaking up all of the sun while people told her she was cute. Thanks for leaving me hanging Nelly.

As the summer got hotter and my layers grew, I realized that by comparing myself to those born into the acceptable beach body was doing me no good. I was not going to spend hours in the gym and pass up (now occasional) Chinese food for the hopes that I would someday look like a model. I did realize that Nelly loved runs and licking my face during 8 minutes abs at home. I was already eating a much better diet and stressing every calorie caused my food to taste like guilt.

Now I’m working on saying “it is okay to have body fat and it is okay not to.” I have found the people that look like me and the people that do not. Bodies are bodies and if they all looked the same we would find something else to pick on. Nelly still embraces her body as it grows just a little bit rounder and I am learning that life goes on with or without the chub.

Sleep well my potato pancake and I will continue to try to eat well.